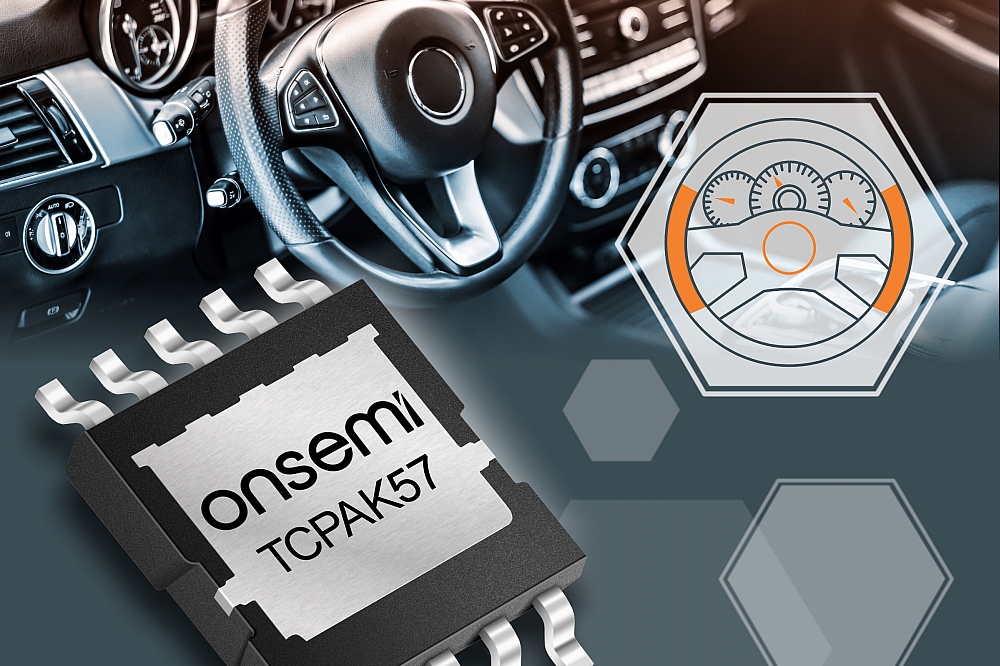 Onsemi has announced a series of new MOSFET devices that feature innovative top-side cooling to assist designers in challenging automotive applications, especially within motor control and DC/DC conversion. The company is showing the new devices at the electronica trade fair and conference in Munich.

Housed in a TCPAK57 package measuring just 5mm x 7mm, the new Top Cool devices feature a 16.5mm2 thermal pad on the top side. This allows heat to be dissipated directly into a heatsink rather than via a typical printed circuit board (PCB). By enabling the use of both sides of the PCB and decreasing the amount of heat going into it, the TCPAK57 provides increased power density. Improved reliability of the new design adds to an overall extended system lifetime.

“Cooling is one of the greatest challenges in high power design and successfully addressing it is the key enabler to reducing size and weight, which is critical in modern automotive design,” said Fabio Necco, vice president and general manager, Automotive Power Solutions at Onsemi. “With excellent electrical efficiency and having eliminated the PCB from the thermal path, the design is significantly simplified while reducing size and cost.”

This solution uses Onsemi’s expertise in packaging to provide what it claims is the highest power density solution in the industry.

TCPAK57 initial portfolio includes 40V, 60V and 80V. All devices are capable of operating at junction temperatures (Tj) of 175°C and are AEC-Q101 qualified and PPAP capable. This, along with their gull wings that allows inspection of solder joints and superior board level reliability, makes them suited to demanding automotive applications. The target applications are high/medium power motor controls such as electric power steering and oil pumps.

Samples of the new devices are available now with full-scale manufacture planned in January 2023.